Like many countries, attractions are shut for the day on Mondays. We decided to hike up to the waterfalls even though we wouldn’t be able to go into the official site, we were given directions to get the the pools at the bottom. It had been a very windy night and when the light wouldn’t switch on, I realised that the power was down again. The hotel has a generator to power essentials but it meant the internet was down again.

After another good and filling breakfast, I went on ahead in the slim chance that I could get a coffee at one of the cafes. As I suspected, everything was closed except the small shop. It was like a ghost town with tumble weed blowing through it, literally, as strong winds were whistling through the village. It was still pretty hot though. While I waited for the others, I was approached by a couple of taxi drivers again. Life was must be so hard for people and, without the walkway and waterfall, the village would not have any external income coming in.

Although we had to walk along the road, it was a pleasant one as there were hardly any cars. We had great views all the way along and could see for miles into the distance. We passed a lot of small hotels and guest houses along the way. Not sure if many people stay here or whether they are more likely to do day trips from elsewhere. 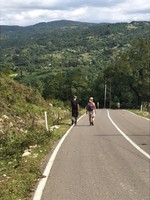 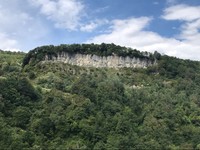 When we got to the last sign for the waterfall we got a bit confused as to where we had to go and ended up turning off too soon but still managed to find a peaceful place by the river to have a rest. 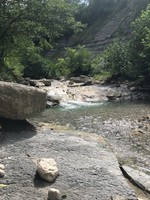 The 7k walk back felt easier as there was more downhill than uphill. A church was in the process of being built and there was a sign asking for donations at the side of the road. I wonder how successful their fundraising efforts are. 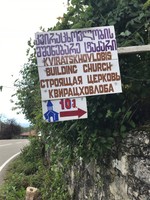 Near one of the guest houses on the way back down there was a great looking tree house. Would love to have a picnic up there. 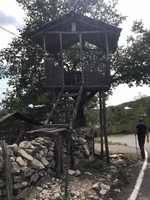 The shop was still open in Zeda Gordi where we bought water and snacks. The afternoon was spent relaxing next to the pool that had just been refilled. I went for the hammock but as the sun disappeared it started to get chilly with the wind still quite high - time to go inside.

I had the Katchapuri and salad which was very good although too much for one person. Luckily the others helped me so it all got eaten. A party of Russians arrived at the hotel so we were no longer the only guests for the night. It looked as if they were on a tour as they had a minibus and Georgian driver with them.

We were going to round off the meal with a cognac but none of the staff were around - it was as if they had disappeared into thin air! Maybe something for tomorrow as it would be our last night at Chateau Chikovani...

Basically, our main focus was to get packed, eat breakfast and get out of the apartment. It was raining outside and puddles were beginning to form in the dug up road outside the bedroom window. Not a very inspiring start to the day. Our host Gnn came to pick up the key as we left and we trundled off to Liberty Square metro in the rain. Fast and Furious we’re still filming as we walked by. We will have to go and see the film although we suspect the car chase will probably be about 2 minutes long. Still no sign of Vin Diesel.

Negotiating the barriers and escalators with large cases was a bit of a challenge but we just about managed it. It’s a long ride down. Our destination was Didube where the Marshrutka heading for the north and west, set out from. The rain persisted but wasn’t heavy & the temperature wasn’t cold either. When we got out of the station, the car park was rammed with what seemed like hundreds of buses making it hard to know where to go. Luckily someone pointed us In the right direction and we managed to get onto a bus that was half full. The buses don’t leave until they are full so we had to wait a little while. Once full, the bus was about to set off when a woman got on last minute with no seat available. Once we left the bus station the driver stopped and got a tiny chair from the boot and put it in the space between two seats. We suspect that this isn’t even legal in Georgia, a country where rules seem prett relaxed, especially on the road.

The journey took 2 hours which went quickly. The scenery wasn’t that exciting until we reached the mountainous area - vast flat plains are just not scenic enough. Borjomi at first sight seemed like a nice little town with a river running through and lots of greenery. The bus stop was very close to our new home - Guest House Casa on Saakadze Street. A bit of a trudge up the hill and we arrived to where a group of excited children were playing happily. Our hosts are lovely and made us feel very welcome. We were given a recommendation for lunch and headed off for an explore of the town. Pesvebi restaurant was on the other side of the river on Erekle Street. It had the usual Georgian fare with a nice terrace overlooking the river. I had salad with corn bread and cheese which was pretty good. From there we went to the Inka cafe for coffee and were also tempted by the cake - which maybe wasn’t a good thing for my waist line.

From there it was a straight run to the mineral water park. There is a small entry fee to go into the grounds. We were going to check out the sulphur pools which were about 4k along the track that runs alongside the river. To get there you have to run the gauntlet of the rather rundown amusement park and the general hawkers that can be found at sites like this. There is also a cheesy ‘Love Bridge’ where newly weds can have their photo taken. This seems to be a thing in Georgia - at Gergeti there were couples having their wedding photos taken against a background of dramatic mountain scenery. The worst exhibit seemed to be the wax works which apparently is the ‘best’ in Georgia. I beg to differ after seeing what was outside.

We didn’t make it to the sulphur pools but went up in the cable car instead which was pretty old unlike the modern ones we rode in Tbilisi. Not sure when it was built but it certainly has a touch of the soviets about it. At the top is a Ferris wheel but we declined to go on it and decided to take the cable car back down and make our way back. Apparently, Borjomi is famous for it’s mineral water which is a big part of their export market. None of us have tasted it yet mostly because of previous experiences of spa water.

Just after we got back to the guest house, the heaven’s opened and there was an absolute downpour. We took refuge, had a bit of down time before venturing out again. Nick had found a restaurant that had been highly recommended but when we got there it was closed. We went into the next place we came across - Cafe Tourist. The people just leaving we’re really singing it’s praises so we thought we’d give it a go. Usual fare but my bean stew was very tasty. We also had to sit at a small table with Joseph Stalin looking down at us. We weren’t entirely sure if it was an ironic statement or whether the family were die-hard Stalinists. Despite that, I’d definitely recommend the place - it’s on Nodar Dumbadze Street close to the Borjomi puppet theatre.

Feeling full to the brim after two pretty big meals in one day, we made our way back and rewarded ourselves with a good night’s sleep.