The train to Ljubljana left the station at 10.35am. Beograd Centar is a strange building. Apparently, the stately and historic old building was closed and will now become a museum. It seems to relate to a big waterfront development. The new station, known locally as Prokop, has not an ounce of beauty about it. It’s basically a concrete slab with a station underneath and a very underwhelming entrance. Apparently, it's unfinished, which is an under-statement. However, the staff are very helpful and there is a cafe, ATM and currency exchange machine near the ticket office. 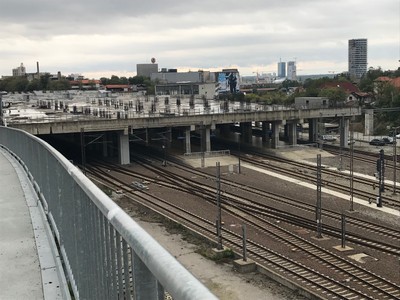 Seats were allocated for this journey - I sat in the wrong one as I assumed that the number facing me as I sat down was the right one, but no, the number is on the back of the seat. The train was pretty busy with both locals and tourists. The young woman sitting opposite me was Slovenian and returning home after visiting relatives in Belgrade.

The train was pretty lively with groups of family and friends travelling together, returning home after a weekend away. There was something very good-natured about people’s interactions. I was glad I’d brought food. I’d also downloaded a new book and audiobook for the journey as being stuck on a train for over 10 hours can get rather tedious. Like previous train journeys, once we were travelling through hills, the scenery got more interesting. There are some pretty archaic stations but however small, there is always an official in hat and uniform, signalling when the train can leave. 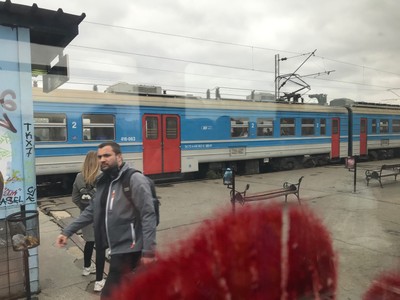 Don't mess with the border police

Travelling from Serbia to Slovenia means going through two borders which means four different checks. At the Serbian/Croatian border the police had spent a lot of time looking at three guy's ID cards. The police moved off but then returned to tell the three guys to get their bags and leave the train. I have no idea what was going on. And with armed police, no-one was going to argue. 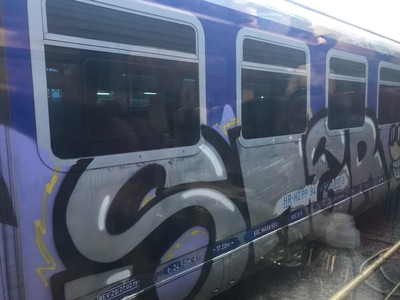 Finding my way to Galeria Rooms

It was a shame that it got dark just as we were getting near Ljubljana as it looked as if the train follows the river as it approaches the town. It was meant to arrive just before 9pm but was late due to the incident at the border when the guys were asked to get off. I had to get to my accommodation by 10pm as that’s when the receptionist would be leaving. Although the room was reasonably near the station, again, arriving in the dark meant that I wasn’t sure which exit to go out of. Once I worked that out it was plain sailing, especially as Slovenia is in the EU and I could use mobile data and get directions from google.

Galeria rooms, my accommodation, is reasonably priced and near the centre. No frills but a nice big room, a huge bed, a kettle and decent shower. After eating non-stop on the train I didn’t really need to eat again particularly as it was late and I hadn’t really had a chance to work out where I could go to get food. Also, the temperatures in the evening are beginning to drop so going out again was definitely not appealing.