Day forty - a day in Belgrade 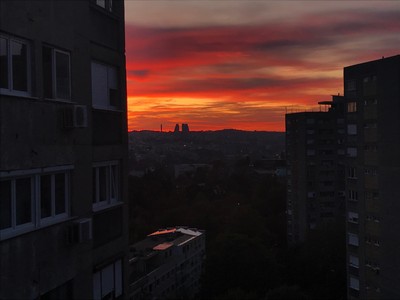 My host Sanja advised me that there was a bus right outside that could take me into town. Looking at the map, it was probably only a 30 minute stroll so thought I’d find my way on foot. It’s also a better way for me to orientate myself in a new town. I was intrigued by the Armenian flags that were flying from lampposts together with Serbian flags. Doing some research I discovered that the Armenian Prime Minister was on a state visit. 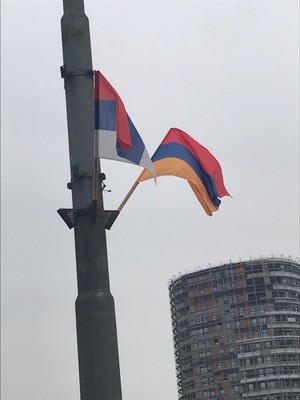 The buildings on Kneza Miloša were very imposing - some were embassies - statues seemed to be a popular adornment. 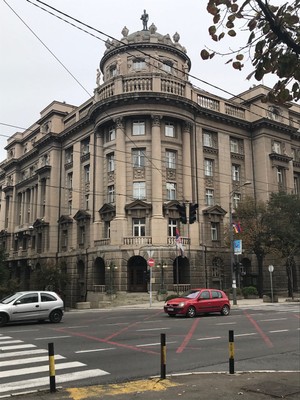 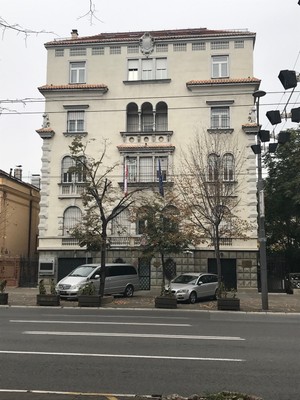 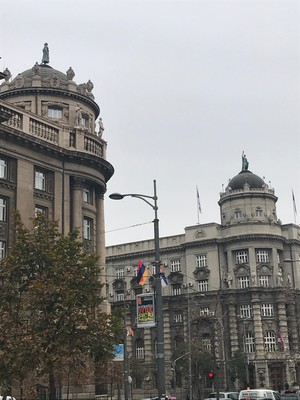 To get into the Centre I had to turn left into Terazije Street - passing the famous Hotel Moskva - the most expensive place to stay in town. It certainly looks very grand. And the restaurant/cafe looked very stylish. Just along from there, Terazije Street was cordoned off for an event that seemingly involved cars. No idea what it was about, but when I passed by later, there was a row of vintage Fiat 500s lined up. 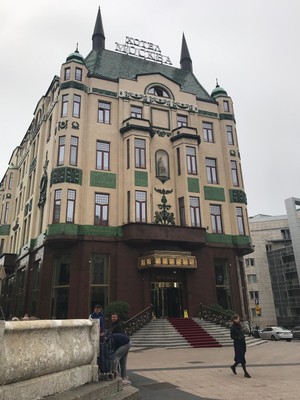 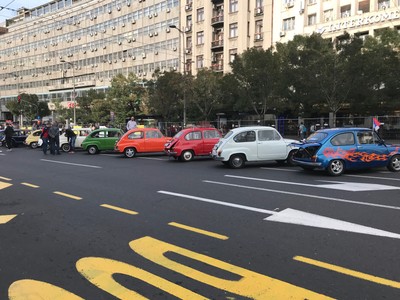 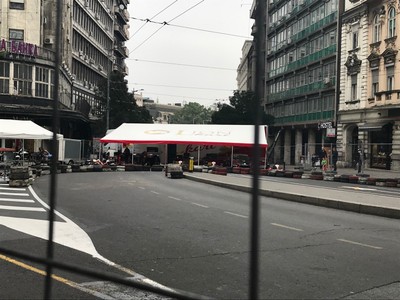 The centre of the City becomes pedestrianised, and is pretty easy to navigate. Terazije is the main shopping street with narrow, interesting streets leading off it. There is the obligatory Republic Square, several theatres, museums and other grand buildings. I started by getting a coffee and some breakfast at Baristocratia coffee society . Through a bit of poor communication on my part, I ended up with a croissant, Nutella and a great slab of cake that I couldn’t possibly eat.

Opposite the cafe, the Katapult Shop is an interesting store full of stalls with lots of handmade goods. I walked around, exploring side streets and independent shops. By lunch time I looked around for somewhere to eat and found that the menus were pretty 'meaty'. Pizza seems to be incredibly popular here but not something I fancied. Managed to google and find a vegetarian restaurant called Mayka which did a really good lentil dhal. 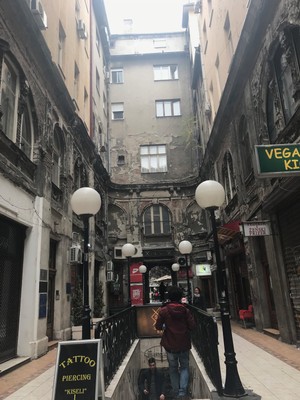 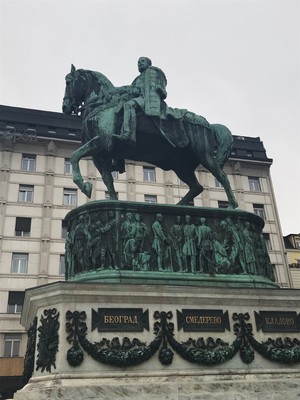 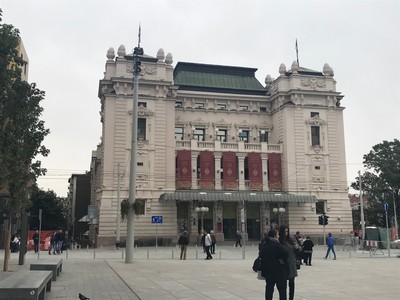 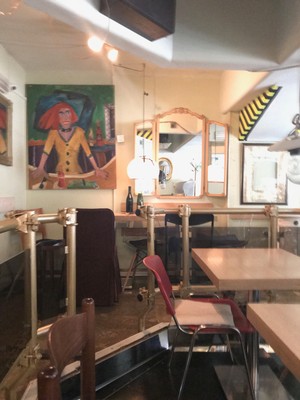 I was going to do the free walking tour in the afternoon but had to go back to the apartment to pick up my power bank as my phone's battery was running low and I wanted to be able to take photos. I got the bus back, to save time. Or I should say that I got the tram back. It was extremely crowded but somehow, people manage to ram themselves on. I also went to the station to check out the cost of a train ticket to my next destination, Ljubljana, on the following day. By the time I did this, I just couldn’t get back in time for the start of the tour.

Instead, I walked to the fortress and gardens in the Stari Grad area as there are good views over where the Sava and Danube river meet. There is no admission charge and being a Saturday it was really busy. Great to see so many people enjoying themselves, particularly young people with their friends. There is a lot to see in the fortress as well as the views - definitely worth a visit. Like so many cities, Belgrade has a history of being occupied or under siege. Most recently, ethnic conflict and the fight for independence during the Yugoslav wars - 1991 to 2001 - resulted in the break up of Yugoslavia into separate states, including Serbia. 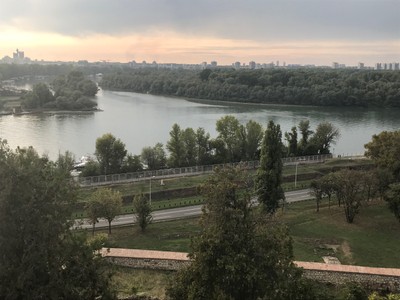 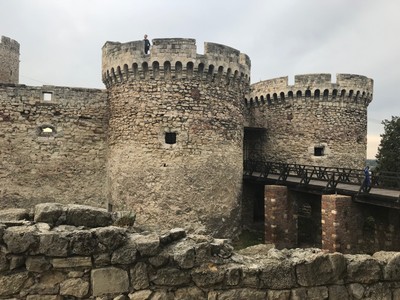 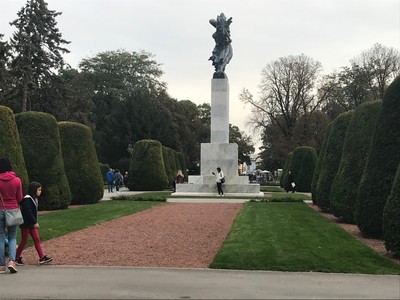 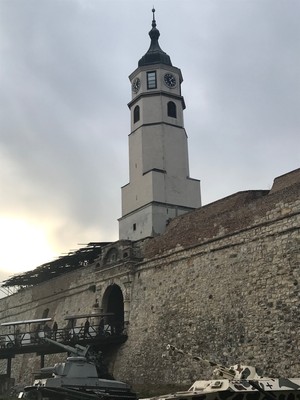 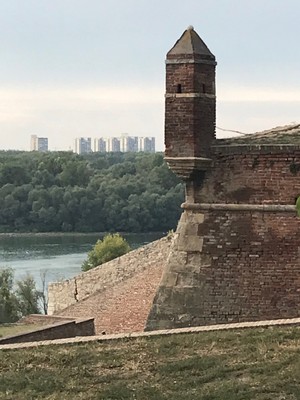 I made my way back, picking up some food en route as there isn’t really any place to eat close to where I’m staying. I also got stuff for the train journey which was going to be another mega one. I made use of my day ticket as it was getting dark. Again, the tram was completely rammed. There were some guys with brass instruments waiting at the bus stop. As I'd walked around I'd seen several bands playing near Republic Square. I'd also seen a demonstration near the Parliament building so wondered if any of this was connected. 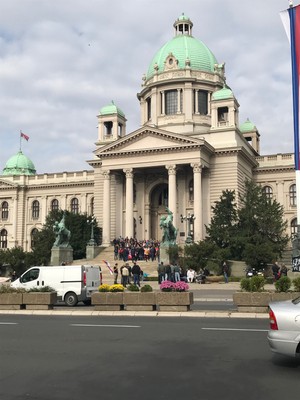 After eating I relaxed with my book and had a nice quiet night in. Definitely nothing to watch on TV! 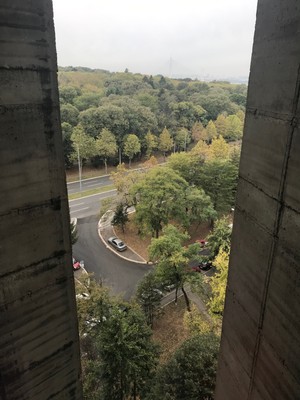 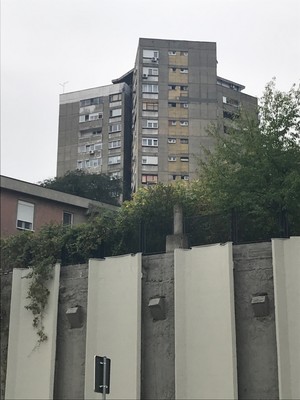 Day eleven - a trip to Batumi

Breakfast was at ? We opted to get the bus to Batumi rather than marshrutka. The bus stop for the 16 and 17 went from outside our door. We’d discovered that the travel card that we got in Tbilisi could also be used for local buses in Adjara region. It cost pennies to travel this way for a 15-20 minute journey, depending on traffic. Getting the bus at around 11am meant that it was a lot emptier and we could actually get seats. The bus tends to stop at every bus stop so that, by the time we got to Batumi, the bus was pretty full. 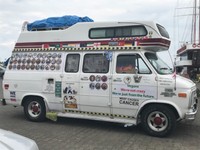 There are some extraordinarily tall buildings in Batumi, the shiny modern towers alongside the old soviet blocks - quite incongruous. At first sight Batumi is quite an ugly place but once we got off the bus nearer the old town, the buildings were more historic, low level and attractive. Also, there are lots of small parks and squares dotted around that makes the place more scenic. We found a statue of Jason of Argonauts fame which was puzzling until we read that the land of Colchis where he sought the Golden Fleece is supposedly in western Georgia. His ship, the Argo, is commemorated by Argo beer that is brewed in Tbilisi and who seem to sponsor the cable car that’s close to the harbour. 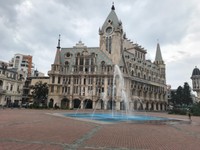 There is quite a lot to see in Batumi but we just needed to find out about the marshrutka to Kutaisi and trains from there to Tbilisi. There are nine Tourist Information centres in Batumi - the one we went to was under the cable car. The people there are very helpful and speak really good English. We got the information we needed, had a coffee and headed back to the relative peace and quiet of Kvariati. Finding the bus stop was a bit of a challenge but we managed to find the stop after chatting to a guy whose only English seemed to be Theresa May & Boris Johnson. He could also do a great impersonation of old pifflepaffle Johnson.

The bus back was crowded and the old woman sitting next to me was very vociferous - shouting out loudly to whoever would listen. As ever we had no idea what it was about although Nick was convinced it was about me! We had some time on the beach but the sea was very rough and threatening black clouds started to come over. We saw an extraordinary sight of thousands of birds streaming across the sky heading north to south as if they were getting away from the storm. It wasn’t like a starling murmuration - it was similar to seeing bird migration. There’s a bird watching Festival in Batumi -the ornithologists would have enjoyed this.

Last meal was at Oqtopus but our appetites were starting to diminish so we didn’t manage to get through all the food. The portions are so big. I much prefer small plates with more variety but that isn’t the Georgian way! We said our goodbyes to the waitress who had served us each time we came to the restaurant - she was very sad to see us go - we ended up having a group hug before we left.

There was a big storm in the night with heavy rain. Luckily, this time the electricity wasn’t knocked out like it was at Borjomi.