The train crosses the Turkey/Bulgaria border so we had to go through passport control in the middle of the night. On the previous overnight train the officers came on board but at the Turkey/Bulgaria border, you have to get off and queue. Apparently if you do it from Sofia to Istanbul you also have to take your luggage off the train to be scanned. Luckily we didn’t have to do that. As the train wasn’t full passport control didn’t take too long and as I was near the front of the queue I got it over and done with so that I could get back onto the train. I think the smokers appreciated the stop. 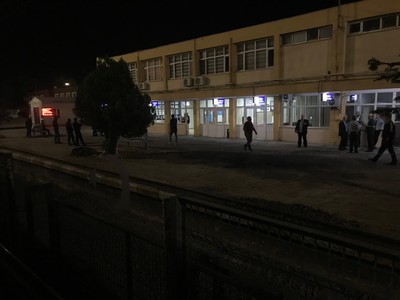 A little bit further down the line the Bulgarian border guards came on the train to check passports so at least we didn’t have to get off again. The rest of the journey seemed to go smoothly although I was aware that we stopped for quite long periods - not sure why. The train was due to arrive at 8.37 but rolled in an hour later. I felt bad as a friend was meeting me at the station and I had no way of getting in touch with him as my O2 international sim failed to work. It's also hard to know how long you’ll be when you have no idea where you are and with no announcements on the train. 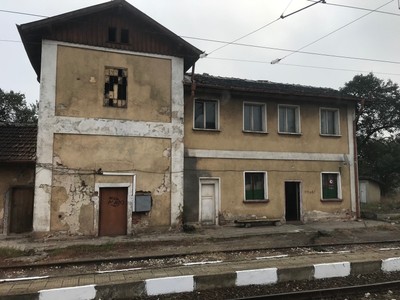 When you get off someone will come up and try to pry your luggage from you. Basically, they pretend they work for the railway but will then demand payment. Luckily, my friend Tom arrived and we exited the station. It’s quite a monolith with a huge lobby area. We walked to Tom and Sarra’s apartment for a coffee. I know Tom from when he was a journalist in Bristol but has been living and writing in Bulgaria for two years now and hopes to continue for the foreseeable future.

We had lunch at a nearby cafe and then I went to find my apartment which was close by. I booked Visito Apartments because of the funky colour scheme although the one that I actually got was muted blue. Maybe it was for the best as probably more restful. The first thing I did was put a wash on. I hadn’t been able to wash clothes since Yerevan so I had a full load and was able to hang it out on the balcony. Very satisfying. 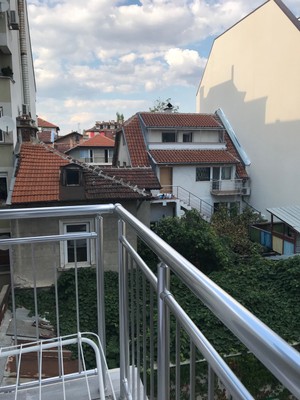 A far cry from Soviet times

The last time I was in Bulgaria was 1978 when it was communist. I remember how the shops didn’t seem to have anything in them and food shops had big queues. Well, it’s very different today. There are plenty of cafes with interesting menus and a variety of shops, just like any other major city.

Tom and Sarra came round to collect me in the evening and we took the metro into the city to eat at a vegetarian restaurant close to Vitosha Boulevard that they wanted to try. Because Tom and Sarra are very involved in the cultural sector, the community they mix with are mostly Bulgarian with some British people. Although English is spoken widely, particularly amongst the younger generation, they have also been learning the language. 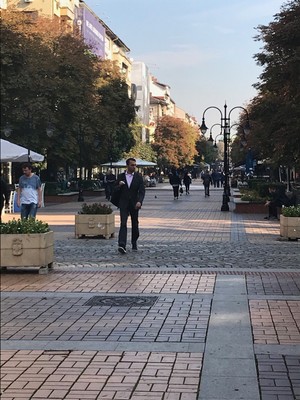 It’s distinctly colder after Istanbul but when the sun is out, still quite mild. There is a cafe culture here in Sofia but people have to wear more layers. Climate is quite temperate - around 22c in summer and below freezing with snow in winter. It definitely felt Autumnal. After a drink we made our way back on foot and I was kindly escorted back to my apartment. I was amazed that I was still awake after midnight considering the broken sleep on the overnight train. Looked forward to crawling into my very large bed!