My last full day in Armenia was going to be focused on shopping. I’d seen a craft fair advertised by the Cascades so headed there after breakfast. The stalls had lovely handmade goods made by the variety of different craftspeople. I priced things up so that I could withdraw enough cash, I didn’t want lots of drams on my hands just as I was about to leave.

Close to the Cascades is the Fem library where my niece volunteered. Having met two women on my travels who had strong connections with it, I really wanted to visit and say hello. To ensure it remains a safe space, the place is not signposted but I managed to find it and was shown around by one of the women who uses the space. As well as the library of feminist fiction and non-fiction, there is a meeting space, kitchen and chill out area where they’d just been running a yoga class. A very calm and safe space.

It was threatening rain so I walked back to the hotel, and had a rest whilst sheltering from what became an incredibly heavy downpour. When it stopped, I had a late lunch at Eat:Fit. Totally delicious roasted quinoa salad which would not go amiss at a Bristol hipster cafe. Always good to have a respite from starchy carbs. I wandered back to the craft fair prepared to make my purchases and the whole thing had been disbanded. The gazebos probably couldn’t cope with such heavy rain. 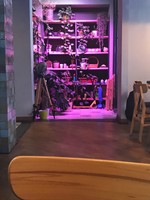 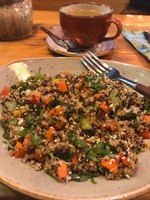 Vernissage, the street market close to Republic Square, has more stalls at the weekend. In amongst the usual touristy stuff there is some lovely handcrafted crafts and artwork. For a change I took a different route walking east past the Yerevan puppet theatre until the end of Sayat Nova, then through the circular park until I reached the market. As I got there people were starting to pack things away. Not sure where the day had gone but I had managed to achieve very little. My plans to do shopping were unravelling but I didn’t want to panic buy so decided to buy gifts elsewhere on my travels. 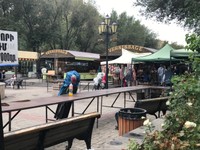 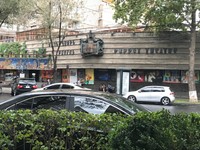 Getting ready to leave

Back at the hotel, I packed up my bag before heading out to Byblos, a Lebanese restaurant around the corner from the hotel. Had a delicious eggplant in tahini cold dish, as recommended by the waiter, with tabouleh salad and mint tea. A very nice last meal. 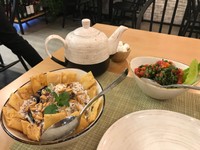 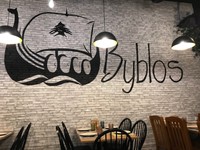 As I had to be up early at 2.30am, I had an early night in the hope that I could a few hours sleep before my very early morning flight to Istanbul.