Basically, the day’s goal was about travelling non-stop to Gyumri. Although the guesthouse was cold and I didn’t have the best sleep, Zina produced the best breakfast I’ve had since travelling. She not only provided the usual offerings, but made cheese pastries similar to borek and a really crispy type of omelette. Karen doesn’t seem to be a big eater and I gamely tucked in but couldn’t really do the feast justice. Then it was time to be on our way. Zina poured all the cob nuts that hadn’t been eaten into my bag, which was lovely but without a nutcracker, they aren’t going to be eaten for a while. 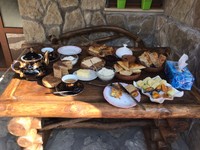 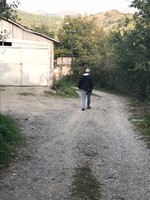 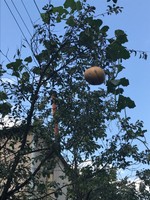 The road to Gyumri took us through Vanadzor, a town of abandoned Soviet era industrial buildings. Vanadzor is the gateway to the Debed Canyon which is probably the most interesting part of the whole country. I’ve been twice before but would definitely revisit in a future. We also skirted Spitak a town that was completely destroyed by the earthquake of 1988 and was then built slightly further away from the original site. 4,000 of its inhabitants were killed and 25,000 died in total although some claim that this is an under-estimation. There is also a theory that it was not a natural event but a result of military operations, exploding munitions underground. Before arriving into Gyumri there is a huge cemetery on the hillside where many of the dead are buried. For survivors, they had no shelter in the coldest part of the year. Apparently, even to this day some people are living in makeshift metal shelters, waiting to be rehoused.

Gyumri - known as Leninakan in Soviet time, was also badly hit. Evidence of the devastation could still be seen on my last visit, but slowly the town is being rebuilt or restored. The disaster was about the first time that the soviet government asked for international agencies to help. 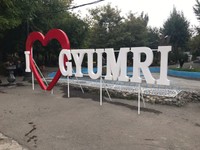 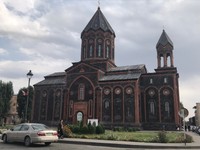 I hoped my hotel would be better than the last guesthouse in terms of comfort. Last time I stayed at Berlin Art Hotel which is pretty classy. Villa Kara is in the Centre of town, about three minutes walk from the main square. It’s very quaint with rooms off a pretty courtyard. My room was comfortable, and pleasant, with a kettle and even better, a radiator in the bathroom. Although warm in the day, the evenings are cool.

I had a walk around to get my bearings. The main square has a cathedral being restored after it was destroyed by the earthquake, City Hall and a large theatre. Squares tend to be used as car parks which is a shame as a green space would be so much nicer, although there are lots of parks in and around the town. There is one park which I think was open when I last came. It’s a soviet era children’s park on Sayat-Nova Street, now abandoned. There was something quite eerie about it. 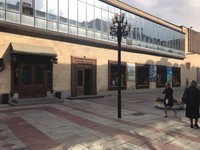 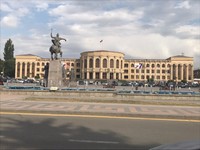 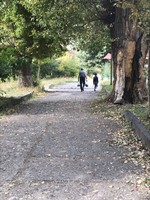 Healthy eating at Herbs and Honey

I googled recommended cafes and found that I was next to one of them - Herbs and honey. Another healthy eating cafe with a good menu especially as a respite from carb overload. I had a healthy stir fry followed by herb tea that was purported to ‘freshen’ me up. I sent photos to the family thinking I was the first Greig to visit only to discover that my brother and niece had already been there earlier in the year. 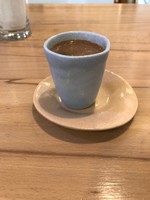 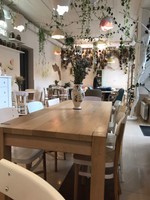 At a loose end

I was starting to wonder why my itinerary included Gyumri. It’s quite attractive with houses built of dark stone and it has a busy market but there wasn’t much else to do there so I visited the Aslamazyan sisters’ museum. They were painters who were heavily influenced by their exotic travels and who also produced ceramics. I thought the plates were beautiful especially the vibrant choice of colours. The museum offers ceramics master-classes and as I came in I saw someone working on a potter’s wheel. 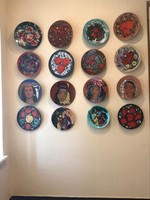 For my evening meal I decided to go for Syrian again. The restaurant Nor Aleppo was just off Ankakhutyan Square at the top of Sayat-Nova Nova. Although cooler it’s nice to have an evening stroll with an extra layer for warmth. The food was really good but I have no idea how they thought I could eat four Syrian breads. Portions are not cut down to size for solo diners. I had cheese borek, fattoush and mutabal (more like the baba ganoush I make at home). I also had a Gyumri beer but no room for dessert. 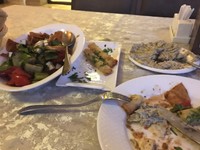 The walk back was fine and as I passed the rather spooky abandoned soviet era park in the dark it struck me that it would make a great setting for a horror movie. Generally, the streets are busy in the evening and so I’ve never felt unsafe walking late at night because there are so many people around, particularly families.

When I got back to the hotel I realised I had no idea when and where breakfast was served. I’ve found that in general, hotels and guest houses don’t furnish you with any basic, useful information when you arrive. We were leaving earlier than usual the next day at 9am so needed to make sure I breakfasted in time whilst avoiding the large groups who tend to breakfast early.