Day twenty-eight - over the border to Artsakh

I had a good breakfast at Mirhav - everything was fresh, not stale like the food at the Grand Resort at Jermuk. I chatted with one of the Armenian guides who was looking after a Swiss couple. Turns out she is a clinical psychologist based in Yerevan and who works as a guide on a freelance basis around her other work. She has had a lot to do with the feminist library that my niece volunteered at and knows Kira, the budding filmmaker that I met in Yerevan. I’m impressed by the strong women that I’ve met - it seems that the feminists are a small but well connected group.

Our final destination was to be Artsakh but before that, my itinerary included Old Khndzoresk, a cave village close to Goris. Even though I’ve been twice before, it is worth revisiting. I had to go by Taxi as Karen’s car has a low undercarriage and the road is rutted and bumpy. He arranged a point where the taxi could drop me off so that we could then carry on with our journey. 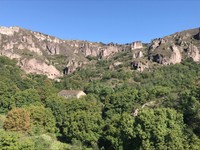 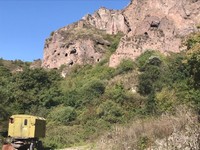 I didn’t explore too far off the beaten track as the pathways are a bit like scree slopes and I didn't want to risk a fall. To get down to the caves there is a suspended walkway. The first time I came, we had to walk down a path to get there. There are a phenomenal amount of steps just to get down to the bridge. I thought I’d find the footpath back up the hill but I just couldn’t remember where it was so clambered up the steps. Although a bit daunting, if taken in stages with small rest breaks, it’s fine. I bumped into the french party that had been at Mirhav hotel. Apparently we are doing a similar itinerary so I’ll be seeing a lot of them over the next few days. 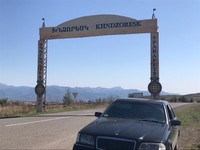 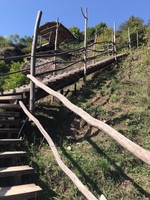 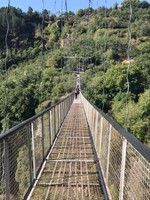 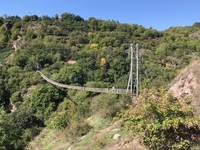 At the Artsakh border, I had to get my visa. I’m not sure of the cost as this sort of thing is handled by the travel company. Last time I came we had to pick the paperwork up at the border but go to the visa office in Stepanakert to get the visa. This is a much better system. The journey - although beautiful - is very slow as there are so many twists and turns as the road hugs the contours of the hillside. After a while, I started to feel a bit travel sick, luckily it passed. The good news is that there is another border access point further north that’s been open for a few years so we didn’t have to return the same way.

We finally arrived in Shushi, dominated by the 40 metre high St. Amenaprkich (St. Almighty) church with it’s striking white walls. Apparently, the town used to be quite a multi-cultural and artistic centre. As well as churches, there were three mosques at one time. Last time we came, we explored the Hunot gorge and it’s unusual waterfalls - definitely worth doing at least once. We also stopped to have a look at the fortress on the way out of town. 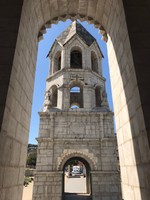 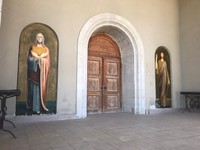 Our next and final stop for the day was Stepanakert and the Park Hotel, near the centre of town and behind the cathedral. I had a guide booked for a tour of the museum. Some interesting exhibits and an informative section about Soviet times and the conflict over the disputed territory of Nagarno Karabagh.

I walked down to the market and bought a Jengylov Hats for a quick lunch from the same stall we went to last time I was here. The market was pretty quiet - not sure when their busy time is. I went to explore the area and see if I recognised anything. The main street, Azatamartikneri is long and has a range of shops on it. It probably isn’t the most interesting place but I strolled to the bottom and back, then past the presidential building before returning to the hotel. I wish I’d checked my guide book as I completely missed the area around the Museum of the fallen soldiers which was quite close to the hotel. I remember it being a pleasant area despite the tragic subject matter with a good arts and crafts shop nearby. 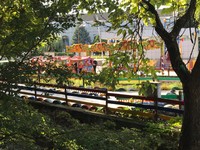 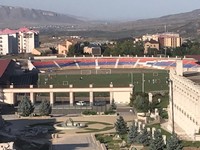 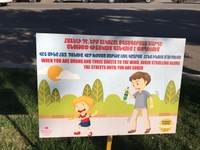 I decided to look for somewhere other than the hotel to get food and found a place called Samra, run by a Syrian Armenian family and serving Middle Eastern food. The menu was quite meat orientated but they made me a plate of falafel and salad which suited me fine. This was rounded off with a cup of herb tea. The owner showed me the dried herb used for the tea. He had originally brought the plant from Syria and had propagated it, drying it for the winter months. I couldn’t quite place it but it did have a bit of a lemon balm scent. He called it Melissa - when I looked it up later, I found that it’s the Latin name for lemon balm!

Wine is cheaper than tea

I’d spotted a “Wine Pub” close by so thought I’d pop in and treat myself to a glass of local wine before going back to the hotel. It was very good and in a huge glass. There was a lot of comings and goings in the place but I seemed to be the only one drinking there. I was surprised at the bill which came to 550 AMD - equivalent of about 80p. When I got back to the hotel I thought that I’d have a pot of tea. This cost me 900 AMD - almost equivalent to two glasses of wine!

A lot of noise was coming from the restaurant. It sounded like some sort of celebration. As I was on the second floor it didn’t really disturb me and I have ear plugs for those eventualities. I don’t think everyone was going to get a good night’s sleep though!