Day twenty-seven - the road to Goris

Breakfast at the hotel wasn’t awe-inspiring. The bread was stale and the fruit wasn’t very fresh. Despite that, I made sure I had a good feed up as food on the road is a bit haphazard. I really appreciated the hotel lift although I know that Karen, my driver would carry my case for me if needed. Although we left at 10am, there was still quite a chill in the air as the sun hadn’t warmed things up yet. 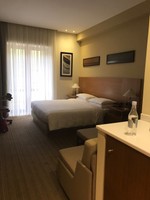 The first stop was Mermaid Falls in Jermuk As the water runs down the rocks, it looks like Mermaid’s hair. There’s a story of a princess who fell in love with a shepherd, her father put a curse on her and she changed into a mermaid. You know the sort of thing! There was a lovely guy setting up the stall who took my photo for me. It was very chilly in the gorge as the sun hadn’t quite made it above the trees. At the top of the gorge there is a formidable looking building of rather imposing and austere looking architecture favoured by the soviets. It almost had CCCP stamped on it. Apparently, it was a popular hotel in soviet times but has been shut for a long time. 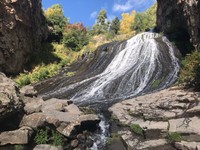 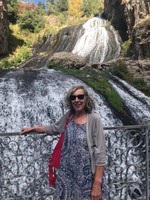 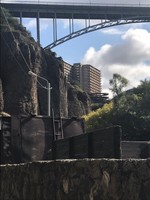 Jermuk is at a dead end so to get anywhere you have to return on the same road to reach the main route towards Meghri and The Iranian border. Although there is a lot of travelling by car on this trip, in Armenia it isn’t really about the destination but the amazing scenery in between.

Once back on the main road, we headed towards Karahunj - the Armenian Stonehenge. It’s a very peaceful place made even more interesting by the birds of prey that are soaring overhead. Apparently, Karahunj means speaking stones and there is a theory that the holes help to make the whistling sound. I’ve seen plenty of eagles but there are other birds that I can’t identify although I think I have seen some falcons. Apparently, there are plenty of species of birds in Armenia and its a popular place for bird watchers. 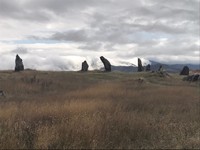 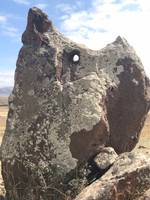 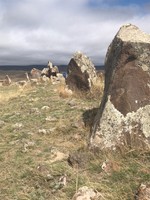 Our next stop was Tatev Monastery. The road there is at quite a high altitude so suddenly we were in fog or low clouds - not sure which. Anyway, we could hardly see a thing. I was so pleased that it wasn’t me driving in these conditions.

At one time Tatev was very isolated sitting as it does on a plateau overlooking a spectacular gorge. At one time it could only be reached by rutted, unmetalled roads with sheer drops on one side into a gorge and no barriers. That was my first experience in 2010. I hate those sorts of roads and even though I trusted our driver, it was still scary. In 2012, the cable car that was being constructed, was completed and the road down to the bottom of the gorge had been improved. Now, as well as the cable car, the road down to the bottom of the gorge and up to Tatev have tarmac. The roadway is still full of hairpin bends but there are barriers and feels 100% safer.

Karen thought that it wouldn’t be good to go on the cable car if foggy as I wouldn’t see anything. I didn’t fancy going on the road either, knowing how many hair pin bends there were. Luckily the fog/clouds cleared before we arrived at the cable car station. 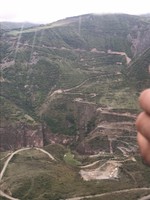 Sometimes there’s a long wait for due to queues but luckily one was due in 10 minutes with space so I paid my 5,000 AMD for a one way ticket and joined the line to get on. Queuing isn’t really a thing here and people barge past you with impunity! Karen was going to drive to Tatev so that we could do the journey back by car. I love cable cars and the views over the gorge are amazing. It’s also the longest cable car in the world. There is a lot of restoration work taking place at Tatev so I couldn’t access the fortress walls but there were still very good views towards the gorge and beyond. It was chilly though and so I had to have several layers on to keep warm. 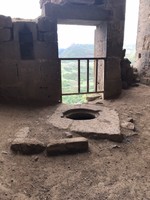 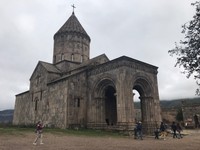 Karen was waiting for me outside the monastery so we made our way down the gorge. I couldn’t believe how much quicker it was now. We didn’t stop at the bottom by Devil’s Bridge as I’d been there twice before and it was also very busy. There are two thermal pools so worth a stop for a dip if it’s your first visit. It’s also quite dramatic as two sides of the gorge butt up against each other.

Apparently the road to Goris can be foggy at this time of year but luckily we didn’t encounter any more and soon we were making our way down the valley into the town. Goris is quite attractive with houses built of stone in a grid. It feels very poor now and although some of the houses have been restored, many are very run down. My hotel was the Mirhav, and it was my third visit there. It’s probably the best in town and has a good restaurant. An annex has been built since I last came which is where I was placed - in the Penthouse suite. Not quite as glamorous as it sounds but a lovely big room with a Juliet balcony. The only access was via a lift and I realised that the only route out in the event of a fire was a ladder on the outside of the building. It’s lucky that I’m reasonably fit and agile! 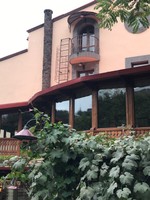 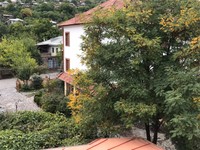 I changed into trousers and layered up to go and explore the town and look for somewhere to have lunch. I’d read that the Deluxe Lounge cafe was quite good and it seemed that it might actually be the only option anyway. I had a good tomato and pepper omelette, and what I thought were chips turned out to be crisps. Quite a strange combo. 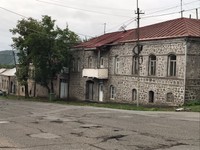 When I got back to the hotel I had a bit of a siesta and caught up on reading etc. I wanted to also make the most of my room. There were lots of groups staying at the hotel of many nationalities - French, Swiss, Spanish, Italian - I seem to be the only British person! I ate at the hotel - it has a good menu but I just opted for soup and salad with a glass of local wine which - just the right amount for me. The evening was chilly outside so I cosied up in my room to finish Tombland, my CJ Sansom book.