The previous day, I’d sent a request to Envoy Hostel & tours to book onto their Soviet Yerevan tour for Wednesday. I just thought it would be fun to do an organised trip around the city. I got an email confirming a place. The cost of the tour is 9,900 AMD to be paid on arrival.

The search for a postbox

I’d written a few postcards but so far hadn’t actually seen a postbox. I didn’t even really know what they looked like. This was my main mission for the day. There was very little information online to steer me in the right direction so I thought I’d walk along Saryan Street to the Main post office. I’d been there before on previous visits. Going in, I still couldn’t see a post box either in or outside the building. It also felt very run down. There were very few people queuing but the transactions were going at a snail’s pace. After waiting for ten minutes and after staff gradually disappeared from view, I gave up.

Continuing along Saryan Street there are lots of inviting looking cafes. At the junction of Tumanyan Street, Saryan then becomes Moskovyan Street. At this point there is a museum dedicated to Hovhannes Tumanyan, considered to be the National poet of Armenia. I decided to have my second coffee of the day at this point and found an attractive bar called 1880. The building next door was covered in an amazing mosaic - it must have taken forever to create. 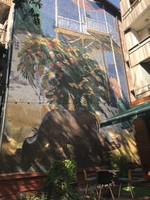 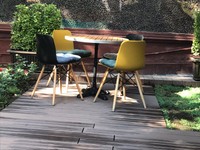 I decided to have breakfast for a change and ordered pancakes expecting them to be a bit like the Georgian ones. What I got was a stack of American style pancakes, with banana, chocolate and ice-cream. This was not going to do my waist line any favours but I managed to eat it all, although it was a bit of a struggle. 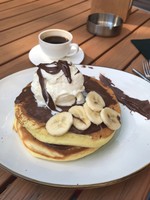 From there I carried on until I reached the opera house. It was very hot at this point and I sought some shade whilst listening to a singer rehearsing. I’m not a fan of opera but even if I was, I wouldn’t know what was on the programme as all the posters for cultural events are in Armenian. I haven’t been able to find any listings online in English. My brother and I had a crazy experience when we went to see Gayane by Katchaturian in 2012. We went to the wrong venue, had to get a taxi that took us to a housing estate not a theatre and even though we eventually arrived about 10 minutes late, it still hadn’t started. It was quite an experience. 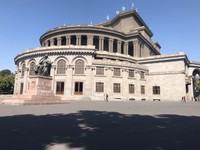 All the while I’d been continuing to look out for post boxes to no avail. I’d used a website which located postboxes when I had the same issue in Tbilisi. It located a postbox on Nalbandyan Street. Pounding the streets in the heat means that I have to stop regularly to rehydrate. Although I carry water with me at all times, it’s nice to stop and have a cup of tea or cold drink. This time, as I was close by, I stopped at Artbridge on Abovyan Street, an old favourite from my last visit. After a refreshing mint tea, I headed for Nalbandyan which was close by. When I got there I found that it was just another post office with no sign of a box outside. I went in and found a small postbox on the wall. It seems that posting has to be done at the Post Office itself. I had almost lost hope of ever being able to send any of the cards that I’d bought and written. It will be interesting to see how long it takes to arrive in people’s letter boxes. Apparently a card I posted to my mother three weeks ago from Georgia, still hasn’t arrived. 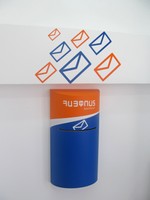 After a refresh and a snack I thought I’d wander around the Kond area which is close to the Parajanov museum. I also wanted to scope out the road to the Children’s railway which I still wanted to see. I discovered that there is an easier way to get to the Parajanov museum. Each time, I’ve gone through a maze of confusing back streets but by going on Paronyan Street and turning left onto Dzoragyugh 1st Street, the museum was right there. 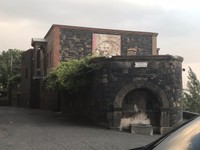 I walked further up the road skirting the gorge and looking over to the Hrazdan football stadium. Suddenly huge gusts of winds blew up, kicking up sand into my eyes. It was just like a dust storm and very unpleasant. There’s a lot of building work going on at the moment creating a lot of construction dust exacerbated by the dry conditions. Every car is covered in the stuff. 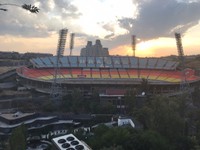 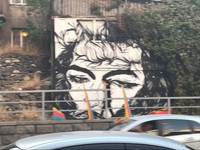 By now I was beginning to feel a little hungry so thought I’d try out one of the cafes close to the apartment. I settled on Wine Time because it had nice decor and a simple menu. I ordered red wine but got white which was fine but it hadn’t been chilled enough. To accompany it, I ordered bruschetta which was good. This was my first alcoholic drink since I’d arrived in Armenia. One glass was enough and it was good only being two minutes away from my apartment. 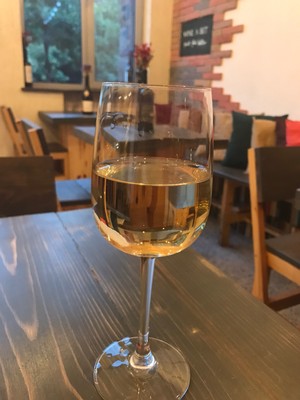