Although most museums are shut on Mondays, the Sergei Parajanov museum is an exception. It’s five minutes walk away from the apartment, overlooking the Hrazdan gorge opposite the Ararat brandy museum. 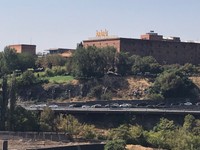 The entrance fee is 1000 lari. This was my third visit. If you like creative arts this is the place for you. Parajanov was one of these people who seemed to be able to do anything. Although principally known for his films e.g. the Colour of Pomegranates, the museum houses collages, sculptures, sketches, hats - a multitude of art created by him. I imagine that he was a man who just could not contain his creativity and had to make something from whatever came to hand. When he was imprisoned - he made reliefs of people’s faces out of bottle tops just using his fingernails. 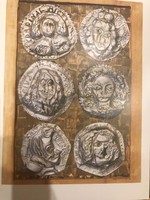 For lunch - i’ve been skipping breakfast - I thought I’d try out one of my niece’s recommendations - The Marilda cafe on Pushkin Street. It was quite small and very busy with just one table free when I arrived. I ordered fattoush salad, baba ganoush and lavash bread as well as a coffee and home made lemonade. The fattoush never arrived but it was probably a good thing as the generous portions meant that the baba ganoush was more than enough. The Armenian version is different from the one that I make at home using tahini. This version is a mix of chargrilled vegetables - mainly eggplants but with onions, tomatoes etc. Totally delicious.

After lunch I wandered down to the tourist information kiosk near Republic Square to get a map. For a major city, the tourist information is pretty poor. Although helpful, the women working there are stuck inside the kiosk and have to talk to you through a small window. This is where Georgia comes out tops, every town has a decent office that you can go into allowing you to browse through leaflets and other information. The Vernnisage market is close by so I decided to stroll through. The last time I’d been there it was a jumble of makeshift stalls with sellers stringing things like tablecloths on lines between trees. I hadn’t realised that the market has been upcycled so that there are now proper stalls in regimented rows. Somehow, a bit of the magic seems to have gone. Apparently it’s busier with more stalls at the weekend so maybe it’s more vibrant then.

Swimming in the City

I walked back ‘home’ via Shahumyan Park, just off Republic Squate as I wanted to remind myself of where the Congreve Hotel was in case I decide to spend time by their swimming pool. As a non guest you can pay to use their outside pool for the day, something my sister and I did back in 2010. I realise it was also only five minutes walk from the apartment via Khorenatsi Street. As I walked back up the street I bought a watermelon, something that I’d been craving for a few days. I managed to find one that wasn’t crazy big, although I have no problem polishing off watermelons as, together with figs, they are my favourite fruit. 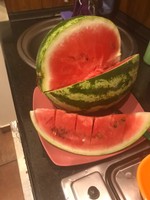 Another evening meal of salads, cheese and bread. Another dry evening of no alcohol, too! 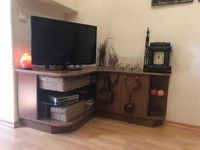